Sept 8th, 2021 Reno City Council passed (6 to 1) a Resolution condemning the horrific  Coyote Killing Contests! Thank you to all who stood up!


RGJ editorial: How East Shore Bus Routes could help visitors and preserve Lake Tahoe
Reno Podcast with Ted Moore on Sustainable Tahoe
2020 "Positive Possibilities from a Pandemic" Beth Amine of 'Joyous Everyday Living' interviews Jacquie Chandler
2019 Nevada Trails TV on Sustainable Tahoe mission update
Washoe Galis Dungal
By Tim Hauserman
​July 4, 2018
​The galis dungals look similar in appearance to the tipis of other Native American tribes of the plains. A major difference, however, was that plains tribes used lighter-weight, portable materials such as animal hides because they were designed to be moved frequently. Galis dungals, on the other hand, were simple, strong and durable and used materials readily available in Tahoe. Once constructed they were not moved, but eventually over many years they would decay and return to the earth.

The Washoe made galis dungals of strong, small trees for the poles and long sections of cedar bark that had been seasoned for a year for the exterior. They did not cut down trees but used those that had already fallen. The structures had a fire pit in the middle with a vent at the top to allow smoke to escape. The door was a covering of deer or bear skin — although the Washoe didn’t hunt bear; they only skinned dead ones if found. They hunted deer, rabbits and birds. The Washoe would spend the cold Sierra nights sleeping next to the fire inside the huts. The galis dungals served as their Tahoe homes and were larger than the ones recently recreated. Chandler hopes that more of the galis dungals can be built, especially near hiking trails. “They can serve as an anchor point for a new adventure; for people to learn how to walk with a Washoe heart,” said Chandler. She is in the process of writing guidebooks that people can use when visiting the huts to learn about Washoe culture and develop a reverence for nature. She is also promoting the huts as a way to begin a forest- or nature-bathing experience. 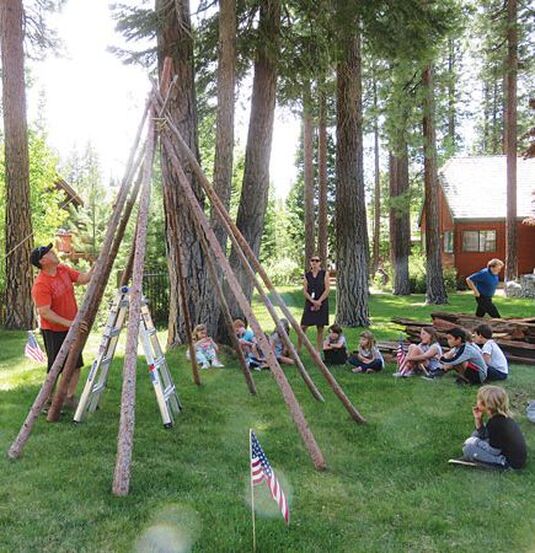 Construction of a galis dungal at the Incline Village/Crystal Bay Visitors Center. | Courtesy Jacquie Chandler
“Nature bathing is an immersive experience in nature, taking a mindful stroll through a natural habitat, a chance to open up your senses and become in harmony in the natural surroundings,” Chandler says.

Aside from introducing people to nature, Sustain Tahoe members believe that the erection of galis dungals are a perfect opportunity to learn how the Washoe relationship to the land was so different from ours. “We want to help visitors become stewards before they leave,” said Chandler.
“We know how to live on the land, but we forgot. This process will help us to remember and recover our natural relationship with the earth,” said Chandler. Sustain Tahoe’s other focus is on helping to create adventures that do no harm. They want people to get out of their cars and take the bus or ride a bike to hike in the woods.

“We want people to understand the habitat and have an immersive educational experience so that your heart will fall in love with the Lake and you will protect it. The main thing we are trying to do is to host good, recreational activities without destroying things,” said Chandler.
“The Washoe have a desire for greater presence of Washoe culture and heritage, which is based on stewardship of the land, wildlife and water,” says Washoe Tribe vice chair Mahlon Machado.
Chandler is reaching out to landowners and other organizations that would like to host a galis dungal. She believes that these Washoe homes could serve as a starting point for a transformation that brings tourists and locals back to an era when the earth was treated with respect. |
Donate
Support Tahoe